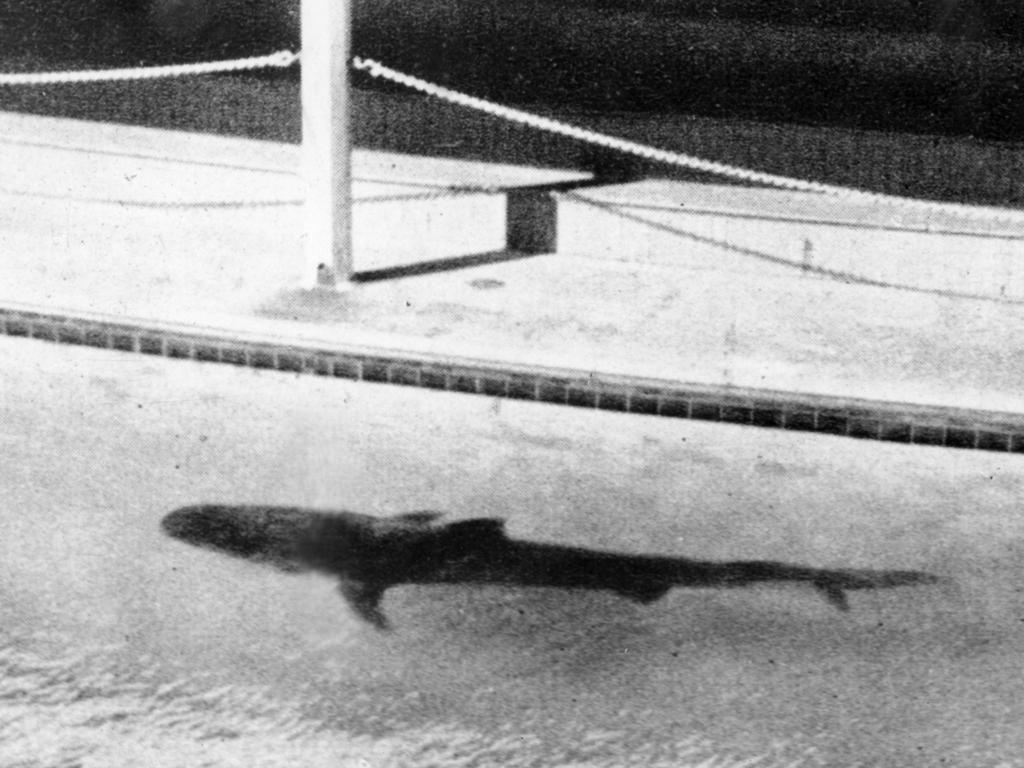 The Coogee Aquarium & Baths were full of young families and children on Anzac Day in 1935. The grand attraction was a fifteen-foot tiger shark caught alive in Gunnamatta Bay a few days earlier. Too big for the aquarium, they placed it in the 25-metre lap pool for viewing.

A dozen mesmerized children watched the shark glide effortlessly around the large pool. Then, suddenly, the shark began violently thrashing as though it was having a seizure. The frightened people watched as the shark then started regurgitating the contents of its belly into the pool. Once finished, the shark swam away, leaving the severed arm of a man floating in its wake.

Detectives were called to investigate. At first, they presumed a swimmer had been taken by the shark, but there was no such report. Then they suspected it was a suicide victim eaten after jumping off a cliff.

Usually, it would be challenging to identify an arm without a body attached. However, this arm was illustrated with a distinct tattoo of two men boxing.

Photos of the tattoo were published in the press. Almost immediately, the arm was identified.

James “Jimmy” Smith was a lightweight boxer who operated billiard saloons before working for a famous boat builder as a general all-rounder.

Approximately three weeks before Anzac Day, Jimmy told his family he was taking a friend named Mr Vaughn out on a fishing party. He would be back in a few days. But, unfortunately, his family never saw him again.

When Jimmy’s brother saw the tattooed arm in the press, he knew it belonged to Jimmy. Incredibly, even though the arm had likely been swallowed by the shark several days before it was regurgitated, it remained undigested, and was probably stuck in the shark’s throat.

Thus, detectives could successfully match a fingerprint on the hand with those of Jimmy’s found in their records.

Jimmy’s friends and family were interviewed to gather clues on his movements leading to his disappearance. No one knew anything. Even Mr Vaughn said there was no such fishing trip.

Finally, a friend came forward and said he received a call from Jimmy on April 7. Jimmy told him he was playing cards at the Hotel Cecil (formerly located at 20 Gerrale Street, Cronulla – now a high-rise block of luxury beachside apartments) with a mutual friend.

The police identified the mutual friend and descended on a beachfront cottage at Taloombi Street, Cronulla, where he was known to frequent. However, the suspect was not there, although they finally found him in a house in Kirribilli, whereupon he was brought in for questioning.

Patrick Brady was a known cheque forger and long-time friend of Jimmy Smith’s. It was Brady with whom Smith was last seen at the Hotel Cecil.

The Shark Arm Case was the most sensational Australian news story in many years and was reported around the world. The prosecution team gathered more than fifty witnesses. The chief witness was the boat builder, Reginald William Holmes, who employed Jimmy Smith at his successful family-run business in Lavender Bay.

When Brady was arrested, he implicated Holmes in crimes linked to the murder. Then a few days later, Holmes, after surviving a gunshot wound to his head, took water police on a speedboat chase for several hours around the harbour before he was finally intercepted and detained.

One theory behind this dramatic event is that he attempted suicide after being implicated in the murder. Another is that some underworld associates tried to have him assassinated.

Once in Police custody, detectives threatened to charge Holmes as an accessory to the murder if he didn’t testify against Brady. He agreed to the deal and told them his version of what happened to Jimmy Smith. According to Holmes, Brady did indeed kill Smith. He alleged that Brady then came to him with the severed arm to intimidate him and demanded money. With Holmes as a witness, the case against Brady was robust. However, that was about to change.

On the morning of June 12, several hours before Brady was due to stand before the inquiry, Reginald Holmes, the chief witness in the case, was found shot dead in his car. Police found it parked under the new Harbour Bridge at Dawes Point. No gun was found at the scene, so suicide was ruled out.

With Holmes now dead, the prosecution’s case was doomed. Brady was still formally charged with murder and faced a trial; however, the evidence against him was not strong enough to prove his guilt.

Finally, in September, the jury acquitted Patrick Brady of the charges, and he walked free.

So, what is believed to have actually happened to Jimmy Smith?

Reginald Holmes was more than just a boat builder; it was revealed that this operation provided a cover for his many underworld activities. He, Smith and Brady were associates engaged in insurance fraud, cheque fraud, cocaine running and extortion. Holmes provided a fleet of speed boats that collected cocaine from passing freighters. Smith was the stand-over man. Patrick Brady was a highly skilled forger of cheques.

However, Holmes and Smith had a falling out over an insurance fraud operation where a high-end yacht known as Pathfinder was sunk near Terrigal to claim the insurance money. However, it is believed Smith may have become a police informant by this point and shared information with them about the fraud, which resulted in Holmes not getting his pay-out.

Holmes and Brady then conspired to kill Smith in revenge. Brady was the hatchet man and did so by luring Smith to the cottage in Cronulla before shooting him. He then carved up Smith’s body and placed it in a metal chest, which he later dumped in Gunnamatta Bay.

The tattooed arm was kept by Brady and given to Holmes as proof that the hit was a success. Holmes then threw Smith’s arm into Sydney Harbour, where the unsuspecting tiger shark swallowed it.

This is one of the most fascinating murder cases ever to have occurred. The chain of events leading to the apprehension of Patrick Brady and the murder of Reginald Holmes is beyond belief. Had they been written in a crime fiction novel they would have been dismissed as too far-fetched.

However, sometimes truth truly is stranger than fiction…

This article was first published by Neighbourhood Media https://www.neighbourhoodmedia.com.au/post/the-shark-arm-murder-of-gunnamatta-bay with photos by Alec Smart.