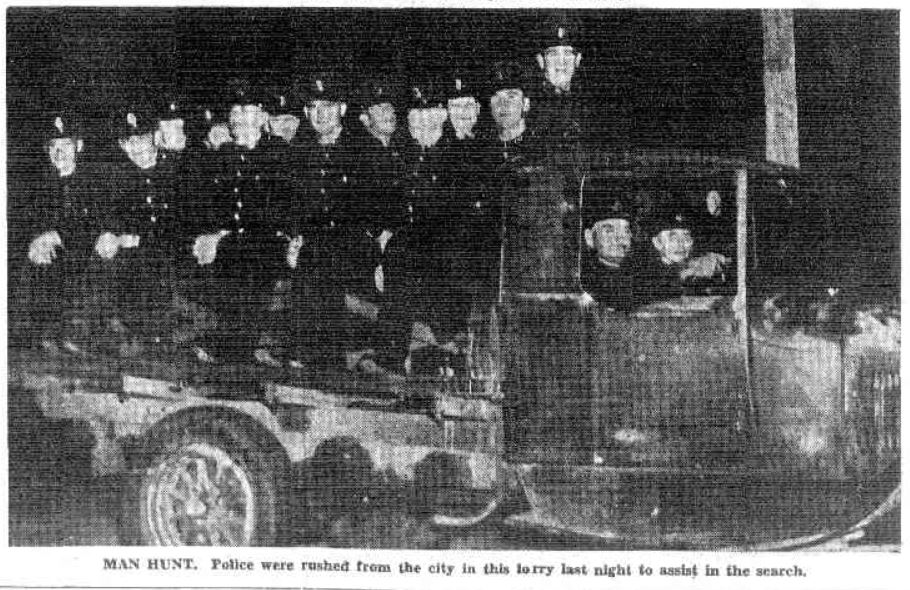 Ronald Powles lived with his wife and son in their home on Pacific Parade, DeeWhy. He was a projectionist at the Narrabeen Roxy Theatre at 15 Waterloo Street. His wife was pregnant with their second child and was due to give birth any day.

Ronald ran the night sessions at the theatre but would go in some mornings to check the machinery before the matinee screenings. It was local, and the visit only lasted a few minutes, so he would typically take his 2-year-old son, Philip, with him for the drive. On this February morning in 1938, he scooped up little Phillip, and off they went.

They arrived at approximately 10 am and parked directly in front of the theatre. Ronald left Philip in the car and quickly ran in. After ten minutes, Ronald returned, but Philip was not in the vehicle. His first thought was that Philip, now in the ‘terrible twos’, may have got restless and discovered that he could get out. So, he searched the street and asked if the shopkeepers and passers-by had seen him.

But Philip was nowhere to be seen.

Ronald then returned to the theatre to call the police. The theatre manager informed him that a man had called fifteen minutes earlier and asked to speak to him.

“I can’t be bothered with phone calls,” said Ronald. “I have lost my boy.”

The manager replied, “the man who rang said the message was about your boy and that he will call you back.”

Ronald was relieved as he assumed the call was someone letting him know they had found his son.

“Where is he?” replied Ronald.

“Don’t be foolish,” said Ronald, “this is no time for joking. I have not the money.”

The voice on the other end ignored Ronald and continued, “don’t make contact with the police, or you might not see your son. I will ring again.” The man hung up.

Ronald and his wife decided to call the police, despite the threat. Several detectives of the Criminal Investigation Branch (C.I.B) shortly arrived at the theatre.

This was the first time in Australian history that a child had been kidnapped and held for ransom. The law took it very seriously. A troop of 20 police officers arrived at the scene and searched the neighbourhood with a fine-toothed comb.

Detectives interviewed the parents to determine why the kidnapper had targeted their family. Neither could think of any reason for it. The police theorised the kidnapper might be an enemy. Ronald could not think of who it could be.

The voice had told them to expect another call at 8 pm that same night. However, when the clock struck eight, the phone did not ring. Ten minutes passed, and still nothing. Then at a quarter past eight, the phone rang. Ronald answered it.

The caller was silent.

“Where is my son?” Ronald demanded.

The caller hang-up and the line went silent. The worried parents began to fear the worst.

That night police broadcast Philip’s description on the radio and his photo was given to the press. The following day, the kidnapping took up the entire front page of the Daily Telegraph and was in every newspaper across the nation.

Now the whole country was looking for Philip.

Miss Sheridan was the principal of a small school in Mona Vale named Quest Haven. The morning had been a bit stressful, and she decided to take a few moments out to enjoy a cup of tea and read the morning paper. Flipping from page to page, she came to the story of the kidnapping. When she saw the photo of young Philip, she almost dropped her tea in shock.

Then, leaping from her chair, the newspaper still in hand, she raced out to the nursery.

She found a small boy and compared him with the photo in the paper. It was the same boy!

The day before, the Quest Haven school nurse received a call from a man telling her that a young boy was going to the school and she would need to collect him from the bus stop out front. She presumed it had been pre-arranged and went to the bus stop as requested.

Sure enough, a bus arrived with a small unaccompanied boy onboard. She took him in, introduced him to the other children, and tucked him into bed later that night. That same evening, the school principal returned from external duties. When hearing of the boy’s arrival, she said they were not expecting any children, and she didn’t know who he was.

The school principal called the police to report they had Philip Powles. When Philip’s parents arrived to collect him, his mother was crying with relief that her son was safe. Philip seemed unphased by the whole ordeal, and when he saw his mother’s tears, he asked, “Why are you crying, mummy?”

When asked where he had been, all he said was “Pippy Powles in a big bus!”

Investigators searched for the kidnapper but could not obtain enough evidence to pin the crime on a suspect. However, they believed the man to have been 25 years old and someone Philip knew. This was the only way they could explain why Philip left with the man without crying.

This case was the first kidnapping and ransom in Australian history and likely the inspiration came from the infamous kidnapping of Charles Augustus Lindbergh Jr in the United States in 1932 which was an international affair. The Lindbergh kidnappers demanded $50,000, a sum significantly higher than what was demanded of the Powels. Twenty-two years later the kidnappers of Graeme Thorne demanded  £25,000 for his safe return. Just like with poor young Charles Lindenbergh, Graeme was murdered by his kidnappers. Luckily the kidnappers of Philip Powel appear to have seen the futility in their demands and let the boy free without harm.

In the end, the mystery behind the identity of the kidnappers of Philip Powell has never been solved. Philip lived a happy life with his parents and the new baby brother, who was born a few days after Philip was found.

The article was originally published by Neighbourhood Media https://www.neighbourhoodmedia.com.au/post/the-narrabeen-kidnapping-australia-s-first-kidnapping-for-ransom