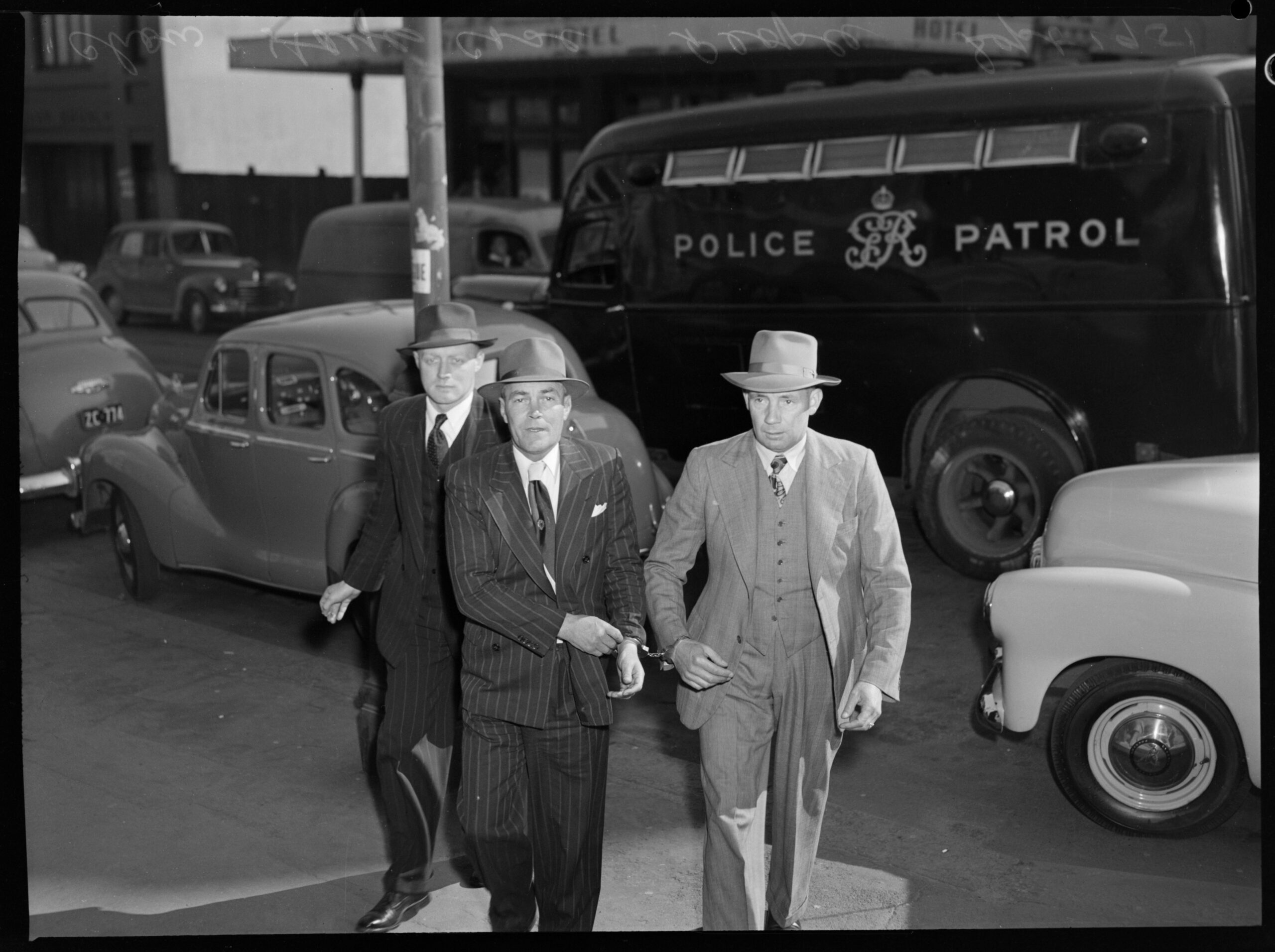 Ziegfield’s Night Club in Central Sydney once had an unenviable reputation as the paramount venue for good times and not-so-good people. All manner of vice took place within its subterranean rooms, and several lives were lost through misadventure or murder.

The whining of the jazz clarinet cut through the ambient sounds of a smoke-filled nightclub several hours past midnight. A late-night crowd filled the venue from wall-to-wall, drinking, clinking glasses, laughing and whistling out for the attention of waiters.

On the stage, before the band, stood a glamorous performer in drag, belting out the latest cabaret hits from New York.

Rowdy men in three-piece suits occupied the tables at the front row. Their features were intimidating, hardened with cauliflower ears and mutilated faces. Around them sat dolled-up women in evening dresses and gloves. Their cheap perfume cut through the smell of stale beer and tobacco smoke.

Behind them, a man with a stern face entered the venue with his wife and two others. The manager showed them to a table in the back row where they sat drinking schooners of beer. He seemed agitated yet calm at the same time. He kept his eyes locked on the men in the front row, and after 20 minutes, he put his glass down, rose to his feet and walked towards them.

On the rowdy table sat a man with a crooked nose. He recognised the stern-faced man walking in his direction, and he called out to him. “You’ve got balls, showing your face here, Chow!”

Chow, the stern-faced man now standing before him, replied, “Did you think you would get away with what you did, you cowardly dog?”

Beneath Chow’s waistcoat was a handgun that he drew and aimed at the man seated before him.

Even with the gun aimed at his face, the seated man smiled.

“You wouldn’t do it here, with all the lights shining and people around.”

A loud blast filled the room. Blood splashed across the faces and dresses of the women around him. Then five more rounds were unloaded into his stomach and chest. The gun was then turned on the remaining men and women seated at the table.

The crooked-nosed man lay on the ground twitching as blood pooled on the old ash-covered floors.

The panic-stricken crowd scrambled for the exit as the gunman walked out calmly.

USA servicemen at Ziegfeld’s during WWII

There were few places in Sydney during the 1940s and 50s as notorious as Ziegfeld’s Night Club and Cabaret. The venue was established in the 1920s in the cellars of 88 King Street of Sydney’s CBD. The club became known for hosting drag shows long before Kings Cross and Oxford Street were a thing. Deep in the age of sly-grog and razor gangs, Ziegfeld’s was known as a place for late-night debauchery, violent crime and MURDER.

In the 20s it was a haunt for thieves and ‘razor gangs’ where, one night in 1927, it was the scene of a particularly bloody razor brawl between rival gangs. Later that year a cop was beaten mercilessly.

In the 1930s drag shows were introduced. However, the decade was also plagued with regular armed hold-ups, robberies and police raids.

One evening in 1938, a 41-year-old woman named Florence Thomas had been drinking heavily at Ziegfeld’s with a 20-year-old sailor she had just met.

Afterwards, they went to her place in Newtown, where the sailor spent a few hours in her company. It is then alleged she willingly accompanied him back to his ship, where the sailor says she tripped and fell into the harbour. Her lifeless water-logged body was dragged up a day later.

No charges were pressed, the ship was allowed to sail on, and the truth around her suspicious death remains a mystery.

1938 advertisement for a drag show at Ziegfeld’s

In 1942, during the Second World War, 150,000 US servicemen were stationed in Australia, and many came to Sydney for rest and recuperation seeking exotic entertainment, booze, gambling, drugs and women. Ziegfeld’s offered it all and became a mecca for the ‘yanks’.

While performing a Christmas cabaret, popular drag queen, Harry Sidney Foy, attempted to kiss several US and Australian servicemen. Most laughed it off, as it was considered part of his act. Unfortunately, one US serviceman took offence to what he termed as “queer” and “filthy behaviour.”

When Foy came in with a kiss, the American punched the entertainer so hard he went flying back into the band and hit his head. Several hours later, Foy was dead.

The American was to be tried for manslaughter, but a government official intervened, and the charge was dropped. In an act of victim-blaming, it was implied that Foy’s death was brought on by his own degenerate behaviour, and the servicemen would not be held responsible. Justice was never served.

In 1943 an underage prostitution racket that catered to the US servicemen was busted by the vice squad. It operated in Ziegfeld’s, where the men met the girls and were then taxied to a house in Bondi. It was shut down, and those involved were gaoled.

Ziegfeld’s golden age ended with the war. However, its reputation remained, and locals still enjoyed its late-night entertainment and sly-grog. By the end of the 1940s, Ziegfeld’s was being raided by the NSW Vice Squad so frequently that most couples didn’t even stop dancing while the raids took place.

In 1951, Ziegfeld’s was immortalised in Australian true crime history. John Frederick “Chow” Hayes was one of the most dangerous gangsters in Australia during the 1930s and 40s. Word got around that rival gangster and former boxer, John “Bobby” Lee, was gunning for him. It turned out to be correct.

Lee and his associates, including a 31-year-old Lennie McPherson who would become ‘Mr Big’ in Kings Cross during the 70s and 80s, organised a plan to whack Chow Hayes. But, by mistake, they killed Chow’s nephew instead.

An enraged Chow sought retribution and on 29 May 1951, he found Bobby Lee inside Ziegfeld’s nightclub and shot him dead in front of more than fifty patrons.

Chow’s reputation put fear in the witnesses and of the dozens interviewed, not a single one would testify that they saw who pulled the trigger.

Finally, infamous Police Detective Ray ‘Gunner’ Kelly arrested Chow. The old school detective knew the only way to convict him for the murder was to lie that Chow confessed when he hadn’t. In court, Chow pleaded innocent and claimed that Detective Kelly said to him, “Now look, Chow. You know that I know you killed Lee, and I will tell as many lies as I can to convict you, and you will tell as many lies as you can to beat it. Is that fair enough?”

Chow was ultimately found guilty of the murder and sentenced to death by hanging but was then commuted to life in prison.

The Government had had enough of Ziegfeld’s by this point and decided to shut it down. However, its demise was likely inevitable as Sydney’s vice and night scene drifted to King Cross, and the old King Street club scene died off.

88 King Street was demolished in the 70s to make way for the building known as 175 Pitt Street, and the luxury watch store, Panerai, now occupies the site where once stood the notorious Ziegfeld’s Night Club and Cabaret.

This article was originally published by Neighbourhood Media https://www.neighbourhoodmedia.com.au/post/murder-and-mayhem-at-ziegfeld-s-night-club