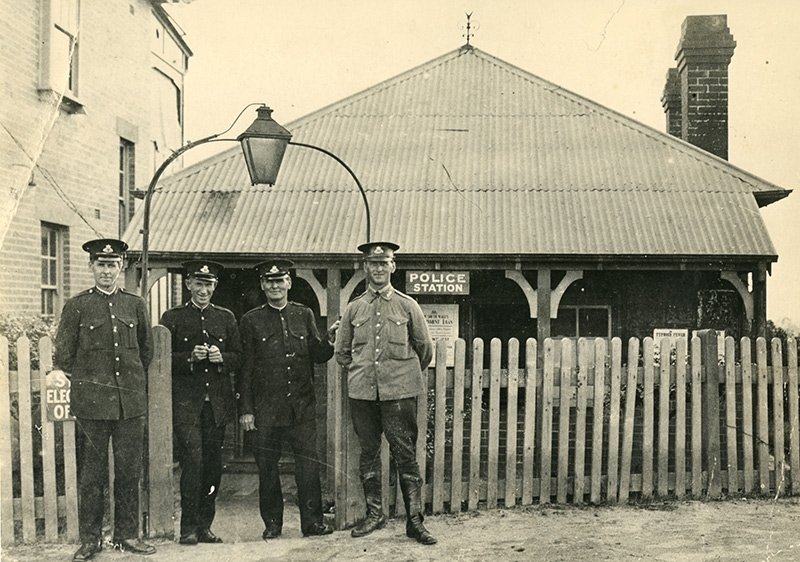 Very few Sydney-siders had heard of St. Ives in the 1910s when the district was covered with citrus orchards and cow paddocks. That all changed when the evening news across Australia reported a “shooting in St. Ives” that resulted in the murder of a police sergeant. To this day, mystery shrouds the events that transpired on the 1st of May, 1913.

A landholder named Thomas Edwin Brown owed unpaid maintenance to his ex-wife and young daughter. Sergeant Hickey and Constable Barclay from Pymble Police Station were tasked with serving Brown with a warrant for arrest unless he paid them the outstanding sum. Sergeant Hickey had served at Pymble Police Station for twenty-five years and knew Brown very well. The versions of events to follow, however, differ drastically between the police and the Brown family.

Constable Barclay testified that he and Sergeant Hickey were invited into Brown’s home to discuss matters before being set upon by Brown and his sons. A brawl in the living room resulted in Brown shooting Hickey, point-blank, in the stomach during the struggle. Hickey hit the ground, then got up and staggered to the front gate. Brown fled the scene, on foot, to Pymble. Barclay then helped Hickey into a passing wagon that he ordered to be taken to a hospital. Sadly, the Sergeant bled to death in transit. Barclay returned to the station, obtained a motorcar, tracked down Brown. He was arrested on Gordon Rd (Pacific Highway), where the putt-putt golf park sits today. Brown then confessed to shooting Sergeant Hickey.

The Brown family testified that the police entered the property illegally, attacked Brown, and pushed him into the bedroom. Sergeant Hickey then attempted to strangle Brown before obtaining a revolver, conveniently sitting on a chest of draws in the bedroom, with the intent to shoot him. However, the mightier Brown managed to overpower Hickey, and the revolver was discharged while in Hickey’s possession. They also allege Constable Barclay ran away scared after the first shot was fired. They claim not to have seen Hickey get shot because he got up and casually walked out after.

Brown faced trial for murdering Sergeant Hickey on three separate occasions. The first trial resulted in a hung jury, and in the second trial was found guilty and sentenced to death by hanging. However, the sentence was commuted to life in prison, and then he was given the right to appeal the verdict.

At the third trial, the jury could not be sure beyond a reasonable doubt who fired the shot that killed Hickey. Their verdict was not guilty of murder or manslaughter. The judge acquitted Brown, who walked out of court a free man. However, the police immediately arrested him on the charge of lunacy. He was declared insane by a court and interned in the Callan Park Asylum until he was released in 1916.

Records show Brown to have been a violent and disturbed man. His wife divorced him on the grounds of violent abuse (he threatened to shoot her). He was required to pay maintenance but was arrested by Sergeant Hickey several times for not paying. In addition, he developed a complex about being persecuted by the government, filing litigations against dozens of government officials, judges, police, and the press between 1900 and 1913. He believed the government conspired against him.

Brown even demanded the NSW Department of Justice protect him, or else he would be compelled to defend his family with lethal force.

Having read many documents relating to the Coroner’s report and the three trials, it is of my opinion that Brown was indeed guilty of murdering Sergeant Hickey. However, as all the witnesses have long since passed away, unfortunately, the truth was taken to the grave with them.

So, what became of Brown’s orchard?

In 1920, various men in the district discovered that a cow paddock on Brown’s orchard was ideal for playing golf. So, they decided to purchase the land from the Brown family to develop into an exclusive golf club called Pymble Golf Club. According to the club, the first six holes lay on Brown’s Orchard, perhaps even on the spot where poor Sergeant Hickey was shot to death.